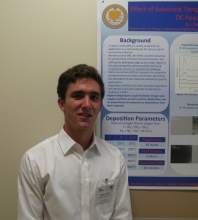 Metal oxy-nitrides (MOxNy or simply M-O-N), which combine the properties and phenomena of two important groups of materials namely oxides and nitrides, are increasingly gaining importance in recent years. Tungsten oxide (WO3) is a widely studied semiconductor for a variety of optical and electronic device applications. Most recently, WO3-based thin films and nanostructures were considered attractive for application in photovoltaics and photoelectrochemical cells. However, the challenge is engineering the electronic structure so as to shift the absorption edge to visible region of the electromagnetic spectrum while improving electrical conductivity. In this work, nitrogen doping is considered to fabricate tungsten oxy-nitrides (WOxNy) to tailor the optical and electrical properties for their potential application in photovoltaic devices. Thus, the goal of this project is to examine the effect of deposition temperature on the structure and properties of W-O-N films. Existing few reports in the literature were limited to ≤400 oC, which may not be sufficient to facilitate the oxygen and nitrogen reactivity and phase stabilization in W-O-N system. Therefore, in this work, WOxNy films were produced by reactive direct current magnetron sputtering in a wide range of temperatures (up to 800 oC) by varying the concentrations of oxygen and nitrogen. Grown W-O-N films were characterized employing X-ray diffraction (XRD), scanning electron microscopy (SEM), and UV-VIS-NIR spectroscopy. The results will be presented and discussed.