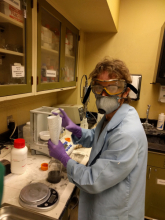 The fabrication and characterization of piezoelectric and dielectric composites of poly(vinylidene flouride) (PVDF), barium titanate (BaTiO3) (BT), and multi-walled carbon nanotubes (CNT) using fused deposition modeling (FDM) 3D printing are presented. A technique for in-situ poling during printing was developed to improve the piezoelectric property and ease of manufacture. PVDF and BT are well-known for their high piezoelectric coefficients among polymers and ceramics, respectively, while CNT was introduced to improve efficiency of stress reinforcement and conductivity for charge carriers between the two. It was found that increasing both BT and CNT improved the piezoelectric properties, and while increasing BT content improved dielectric properties, CNT had a threshold where increasing content switched from improving dielectric properties to being conductive. Applications in sensor technology were explored by measuring current and voltage while subjecting the materials to cyclic loads or manual stimulation with fingers, while applications in energy storage will be explored by calculating maximum energy density. Furthermore, the composites were subjected to tensile and fatigue tests to characterize their mechanical properties, and internal molecular structure was analyzed using scanning electron microscopy (SEM) and fourier transform infrared spectroscopy (FTIR). A dielectric constant of 43 was achieved with 24% BT and 1% CNT by weight in PVDF, and a piezoelectric coefficient of 129 pC/N was achieved with 18% BT and 0.4% CNT. An effective and scalable 3D printing technique for the manufacture of piezoelectric and dielectric materials was demonstrated.