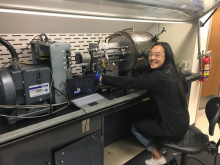 Actinide endohedral metallofullerenes (EMFs) represent an intriguing and unexplored area of EMF chemistry. Recently there have been successes in producing a series of mono-uranium EMF species with “isolated pentagon rule” (IPR) cages, such as U@D3h(1)-C74, U@C2(5)-C82, U@C2v(9)-C82, U@D2(21)-C84 and U@C1(11)-C86. However, no uranium fullerene species with non-IPR cages have been reported or characterized. To obtain the target EMFs, soot containing uranium EMFs was produced from electrically contacting a carbon electrode with a graphite rod filled with uranium oxide, graphite powder, and iron nitride (weight ratio of U3O8:FexN:C = 1.96:1:2.5) in a conventional Krätschmer-Huffman arc-discharge reactor. During the arcing process, the current is held constant at 100 A under an atmosphere of 200 torr He and 20 torr N2. The soot was then Soxhlet-extracted with CS2 for 6.5 hours; after, the extracts were separated and purified using multistage HPLC. Under these optimized conditions, two mono-uranium EMFs U@C76 and U@C80 were synthesized accompanied by the previously reported U@C74, U@C82, and U@C86. The corresponding single crystal X-ray diffraction results show that both compounds possess brand new non-IPR cages, namely isomers U@C1(17894)-C76 and U@C1(28324)-C80. In addition, a carbide cluster uranium EMF, U2C79, has been observed in the soot under these conditions. The different retention times of the compounds observed in the HPLC chromatogram suggest a non-IPR cage structure. To produce more diverse uranium EMFs with non-IPR cages, the different weight ratios, electrical currents, and N2 pressures during the arcing process are currently being explored.