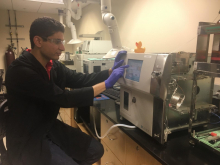 To date, the nitride cluster metallofullerenes (NCFs) represent the most promising species among the family of endohedral metallofullerenes due to their particularly high yield. However, most of the studies are limited in the realm of lanthanides, with no actinide based cluster fullerenes having been explored. Herein, we report for the first time the synthesis and characterization of an actinide based nitride cluster fullerene. Compound U2NC78, likely U2N@C78 was discovered by the addition of small amounts (3-6 torr) of ammonia into the Krätschmer-Huffman arc-discharge method using graphite rods filled with uranium oxide and graphite powder with a weight ratio U/C of 1.96:2.5 and under an atmosphere of 200 torr He. The yield was optimized by assessing various solid sources of nitrogen in the packing along with N2 gas. The soot was Soxhlet-extracted for six and a half hours using CS2. Interestingly, besides U2N@C78, a compound with formula U2C79, likely U2C@C78 was synthesized using this process. Both were isolated in relatively high purity after multi-stage HPLC separation. Comparing with U2C@C78, the corresponding spectroscopic features of U2N@C78 and the geometry of U2N cluster are expected to be very different, even though the only difference is the nitrogen/carbon atom switch. The results will shed light not only on how we view the bonding in uranium clusters, but also the interaction between the uranium cluster and the fullerene cage.