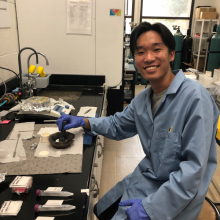 Synthesis and Characterization of Indium-Doped Gallium Oxide for Optoelectronic Applications

Monoclinic gallium oxide (β-Ga2O3) is a promising semiconductor material, which exhibits exceptional chemical and thermal stability in addition to an ultra-wide band gap of ~4.8 eV. These characteristics make it a great candidate for a plethora of applications such as high-powered electronics, dielectric materials, and optoelectronics. However, to enhance the functional performance, doping of various cations into β-Ga2O3 has been considered in the literature. In this present work, we focus our attention towards indium (In) doping into β-Ga2O3. By doping with In, we expect that the structural, electronic and optical properties can be tailored. To validate the hypothesis, a series of In doped β-Ga2O3 compounds were synthesized through conventional solid-state synthesis, where the mixing of In and Ga oxides was carried out in controlled stoichiometric proportions. The resulting materials were characterized by studying the crystal structure, morphology, optical, and electrical properties. Based on the results, structure-chemistry-property correlation is established in In-doped β-Ga2O3 compounds.