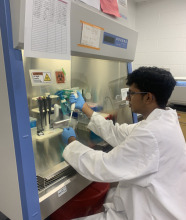 From ischemic heart disease to cardiomyopathy, cardiovascular diseases continue to be the leading cause of death worldwide. In an effort to understand the mechanisms affecting the diseased cells and tissue, our lab developed an in vitro model. While developing this model, two different biocompatible hydrogels were respectively cultured with cardiomyocytes and neurons. The hydrogel cultured with cardiomyocytes consisted of gelatin and alginate, and was crosslinked with divalent calcium ions. The hydrogel cultured with neurons consisted of alginate, genipin, and fibrin; the hydrogel was crosslinked using chitosan, β-glycerophosphate, thrombin, and calcium chloride. The crosslinker’s purpose is to chain the hydrogel together such that the structure will hold when non-uniform stress is introduced. In order to create an accurate model representing the “neuro-cardiac junctions” found in the heart, cardiomyocytes and neurons were co-cultured on a layered hydrogel composed of the two prior mentioned hydrogels. Fourier Transform Infrared (FTIR) spectroscopy not only confirmed each of the hydrogel’s chemistry and crosslinking, but it also identified the chemical compatibility between the two hydrogels. The emergent properties from such characterizations are what determine the viability of the hydrogel to act as an in vitro model and/or regenerative medicine treatment. Keywords: Hydrogel, Tissue Engineering, FTIR, Biocompatibility