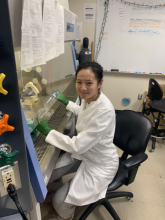 Escherichia coli (E. coli) is a beneficial harmless bacterium that is commonly found in intestines, but certain strains of E. coli can cause painful symptoms including diarrhea, stomach pain and cramps and low-grade fever. According to the Centers for Disease Control, about 265,000 STEC infections occur in the United States each year. The very young, the elderly, and people with weakened immune systems are especially at risk, which emphasizes the need for a low cost, fast acting, and simple method of diagnosis. Through the use of a polydimethylsiloxane (PDMS)/paper hybrid microfluidic device integrated with loop-mediated isothermal amplification (LAMP), we are able to test for the presence of E. coli bacteria with high accuracy using the properties of fluorescence. This limits the need for big, bulky, and expensive equipment that is difficult to use and only accessible to a certain portion of the population. The use of an algorithm coded in Python can help definitively determine whether there is a presence of E. coli by precisely measuring the level of fluorescence in the media during the LAMP tests, as it is able to do so at a level that far exceeds the human naked eye. The use of an algorithm would increase the accuracy of the LAMP tests while still limiting the use of high level technologies, as the algorithm can be implemented on any type of computer and is completely optional to the overall process.