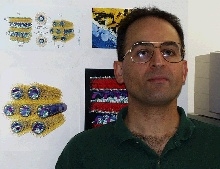 Cyrus R. Safinya received a B.S. in Physics and Mathematics from Bates College in 1975. He received his Ph.D. degree in Physics in 1981 from the Massachusetts Institute of Technology for his work on "X-ray Scattering Study of the Critical Behavior of Binary Liquid Crystal Mixtures" under the supervision of Professor Robert J. Birgeneau (current President of UC Berkeley). In 1981, he joined the Exxon Research and Engineering Company in New Jersey and conducted research on the structure of complex fluids and biological membranes. He joined the faculty of the University of California at Santa Barbara as a Professor of Materials and Physics in 1992. His group's research is focused on elucidating structures and interactions of supramolecular assemblies of biological molecules. This includes understanding structures of DNA condensed by oppositely charged lipids and multivalent counter-ions in vitro and the relationship with condensed DNA in vivo, and developing a fundamental understanding of interactions between cell cytoskeletal proteins and their associated molecules which leads to their distinct structures (related to their specific functions in cells) on the nanometer to the many micrometer scales. A major project in the group has the goal of developing lipid and polymer based non-viral vectors (carriers) of DNA, peptides, and proteins for gene and drug delivery applications. Structures are solved by combining reciprocal space and real space data resulting from x-ray diffraction and scattering, light-microscopy differential-interference-contrast and three-dimensional confocal imaging, and electron microscopy experiments.