This is intended as a (very) brief introduction to some of the common x-ray diffraction techniques used in materials characterization. It is designed for people who are novices in this field but are interested in using the techniques in their research. Extensive and authoritative discussions can be found in the numerous books and journal articles on this subject. Some references are listed below.

X-rays are electromagnetic radiation with typical photon energies in the range of 100 eV - 100 keV. For diffraction applications, only short wavelength x-rays (hard x-rays) in the range of a few angstroms to 0.1 angstrom (1 keV - 120 keV) are used. Because the wavelength of x-rays is comparable to the size of atoms, they are ideally suited for probing the structural arrangement of atoms and molecules in a wide range of materials. The energetic x-rays can penetrate deep into the materials and provide information about the bulk structure.

X-rays are produced generally by either x-ray tubes or synchrotron radiation. In a x-ray tube, which is the primary x-ray source used in laboratory x-ray instruments, x-rays are generated when a focused electron beam accelerated across a high voltage field bombards a stationary or rotating solid target. As electrons collide with atoms in the target and slow down, a continuous spectrum of x-rays are emitted, which are termed Bremsstrahlung radiation. The high energy electrons also eject inner shell electrons in atoms through the ionization process. When a free electron fills the shell, a x-ray photon with energy characteristic of the target material is emitted. Common targets used in x-ray tubes include Cu and Mo, which emit 8 keV and 14 keV x-rays with corresponding wavelengths of 1.54 Å and 0.8 Å, respectively. (The energy E of a x-ray photon and its wavelength is related by the equation E = hc/l, where h is Planck's constant and c the speed of light) (check out this neat animated lecture on x-ray production)

In recent years synchrotron facilities have become widely used as preferred sources for x-ray diffraction measurements. Synchrotron radiation is emitted by electrons or positrons travelling at near light speed in a circular storage ring. These powerful sources, which are thousands to millions of times more intense than laboratory x-ray tubes, have become indispensable tools for a wide range of structural investigations and brought advances in numerous fields of science and technology.

X-rays primarily interact with electrons in atoms. When x-ray photons collide with electrons, some photons from the incident beam will be deflected away from the direction where they originally travel, much like billiard balls bouncing off one anther. If the wavelength of these scattered x-rays did not change (meaning that x-ray photons did not lose any energy), the process is called elastic scattering (Thompson Scattering) in that only momentum has been transferred in the scattering process. These are the x-rays that we measure in diffraction experiments, as the scattered x-rays carry information about the electron distribution in materials. On the other hand, in the inelastic scattering process (Compton Scattering), x-rays transfer some of their energy to the electrons and the scattered x-rays will have different wavelength than the incident x-rays.

The peaks in a x-ray diffraction pattern are directly related to the atomic distances. Let us consider an incident x-ray beam interacting with the atoms arranged in a periodic manner as shown in 2 dimensions in the following illustrations. The atoms, represented as green spheres in the graph, can be viewed as forming different sets of planes in the crystal (colored lines in graph on left). For a given set of lattice planes with an inter-plane distance of d, the condition for a diffraction (peak) to occur can be simply written as

which is known as the Bragg's law, after W.L. Bragg, who first proposed it. In the equation,l is the wavelength of the x-ray, q the scattering angle, and n an integer representing the order of the diffraction peak. The Bragg's Law is one of most important laws used for interpreting x-ray diffraction data.

It is important to point out that although we have used atoms as scattering points in this example, Bragg's Law applies to scattering centers consisting of any periodic distribution of electron density. In other words, the law holds true if the atoms are replaced by molecules or collections of molecules, such as colloids, polymers, proteins and virus particles.

Powder XRD (X-ray Diffraction) is perhaps the most widely used x-ray diffraction technique for characterizing materials. As the name suggests, the sample is usually in a powdery form, consisting of fine grains of single crystalline material to be studied. The technique is used also widely for studying particles in liquid suspensions or polycrystalline solids (bulk or thin film materials).

The term 'powder' really means that the crystalline domains are randomly oriented in the sample. Therefore when the 2-D diffraction pattern is recorded, it shows concentric rings of scattering peaks corresponding to the various d spacings in the crystal lattice. The positions and the intensities of the peaks are used for identifying the underlying structure (or phase) of the material. For example, the diffraction lines of graphite would be different from diamond even though they both are made of carbon atoms. This phase identification is important because the material properties are highly dependent on structure (just think of graphite and diamond).

Powder diffraction data can be collected using either transmission or reflection geometry, as shown below. Because the particles in the powder sample are randomly oriented, these two methods will yield the same data. In the MRL x-ray facility, powder diffraction data are measured using the Philips XPERT MPD diffractometer, which measures data in reflection mode and is used mostly with solid samples, or the custom built 4-circle diffractometer, which operates in transmission mode and is more suitable for liquid phase samples.

A powder XRD scan from a K2Ta2O6 sample is shown below as a plot of scattering intensity vs. the scattering angle 2qor the corresponding d-spacing. The peak positions, intensities, widths and shapes all provide important information about the structure of the material.

Generally speaking thin film diffraction refers not to a specific technique but rather a collection of XRD techniques used to characterize thin film samples grown on substrates. These materials have important technological applications in microelectronic and optoelectronic devices, where high quality epitaxial films are critical for device performance. Thin film diffraction methods are used as important process development and control tools, as hard x-rays can penetrate through the epitaxial layers and measure the properties of both the film and the substrate.

There are several special considerations for using XRD to characterize thin film samples. First, reflection geometry is used for these measurements as the substrates are generally too thick for transmission. Second, high angular resolution is required because the peaks from semiconductor materials are sharp due to very low defect densities in the material. Consequently, multiple bounce crystal monochromators are used to provide a highly collimated x-ray beam for these measurements. For example, in the Philips MRD used in the x-ray facility, a 4-crystal monochromator made from Ge is used to produce an incident beam with less than 5 arc seconds of angular divergence.

Basic XRD measurements made on thin film samples include:

The following graph shows the high resolution XRD data of the superlattice peaks on the GaN (002) reflections. Red line denotes results of computer simulation of the structure. 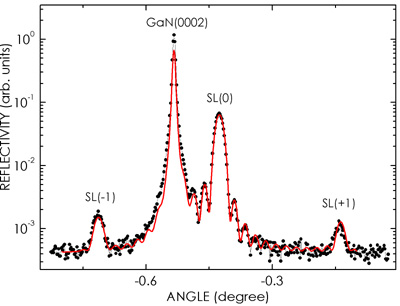 Texture measurements are used to determine the orientation distribution of crystalline grains in a polycrystalline sample. A material is termed textured if the grains are aligned in a preferred orientation along certain lattice planes. One can view the textured state of a material (typically in the form of thin films) as an intermediate state in between a completely randomly oriented polycrystalline powder and a completely oriented single crystal. The texture is usually introduced in the fabrication process (e.g. rolling of thin sheet metal, deposition, etc.) and affect the material properties by introducing structural anisotropy.

A texture measurement is also referred to as a pole figure as it is often plotted in polar coordinates consisting of the tilt and rotation angles with respect to a given crystallographic orientation. A pole figure is measured at a fixed scattering angle (constant d spacing) and consists of a series of f -scans (in- plane rotation around the center of the sample) at different tilt or Y -(azimuth) angles, as illustrated below. 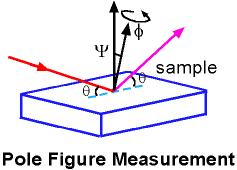 Structural and residual stress in materials can be determined from precision lattice constants measurements. For polycrystalline samples high resolution powder diffraction measurements generally will provide adequate accuracy for stress evaluation. For textured (oriented) and single crystalline materials, 4-circle diffractometry is needed in which the sample is rotated so that measurements on multiple diffraction peaks can be carried out. The interpretation of stress measurement data is complicated and model dependent. Consult the reference literature for more details.

SAXS measurements are technically challenging because of the small angular separation of the direct beam (which is very intense) and the scattered beam. Large specimen-to-detector distances (0.5 m - 10 m) and high quality collimating optics are used to achieve good signal-to-noise ratio in the SAXS measurement.

X-ray crystallography is a standard technique for solving crystal structures. Its basic theory was developed soon after x-rays were first discovered more than a century ago. However, over the years it has gone through continual development in data collection instrumentation and data reduction methods. In recent years, the advent of synchrotron radiation sources, area detector based data collection instruments, and high speed computers has dramatically enhanced the efficiency of crystallographic structural determination. Today x-ray crystallography is widely used in materials and biological research. Structures of very large biological machinery (e.g. protein and DNA complexes, virus particles) have been solved using this method.

In x-ray crystallography, integrated intensities of the diffraction peaks are used to reconstruct the electron density map within the unit cell in the crystal. To achieve high accuracy in the reconstruction, which is done by Fourier transforming the diffraction intensities with appropriate phase assignment, a high degree of completeness as well as redundancy in diffraction data is necessary, meaning that all possible reflections are measured multiple times to reduce systematic and statistical error. The most efficient way to do this is by using an area detector which can collect diffraction data in a large solid angle. The use of high intensity x-ray sources, such as synchrotron radiation, is an effective way to reduce data collection time.

One of the central difficulties in structural determination using x-ray crystallography is referred to as the "phase problem", which arises from the fact that the diffraction data contains information only on the amplitude but not the phase of the structure factor. Over the years many methods have been developed to deduce the phases for reflections, including computationally based direct methods, isomorphous replacement, and multi-wavelength anormalous diffraction (MAD) methods.